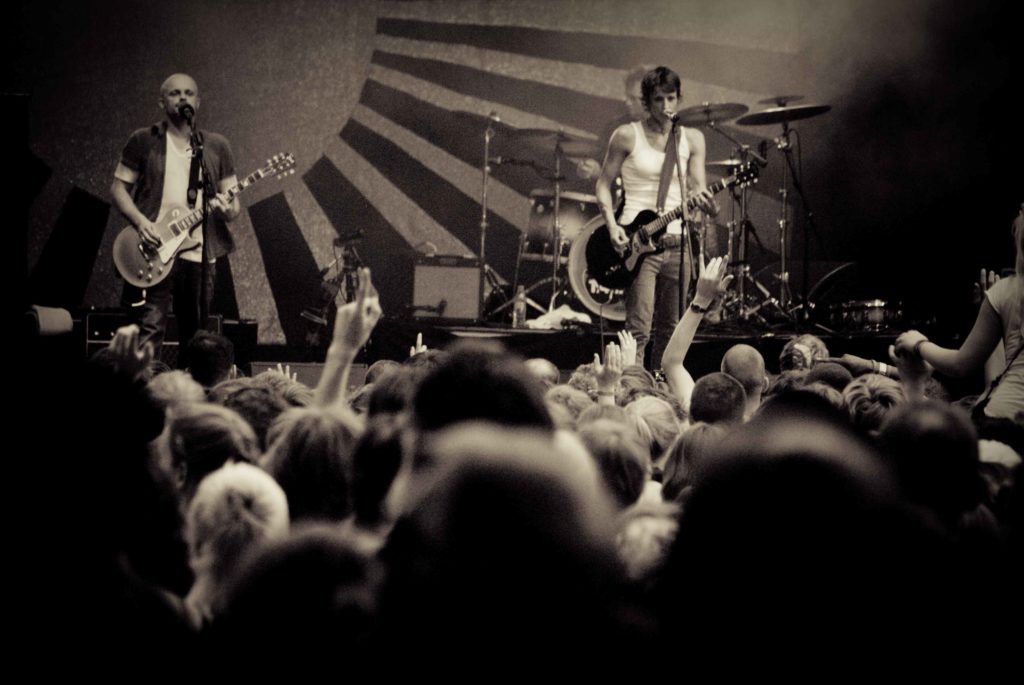 Woodstock is widely regarded as a pivotal moment in popular music history, as well as the definitive nexus for the larger counterculture generation. Billed as “An Aquarian Exposition: 3 Days of Peace & Music”, it was held at a 600-acre dairy farm in the Catskills near Woodstock, New York. During the often rainy weekend, 32 acts from various music genres, performed outdoors before an audience of 400,000 people.

However the facilities were not equipped to provide sanitation or first aid for the number of people attending; hundreds of thousands found themselves in a struggle against bad weather, food shortages, and poor sanitation. Today’s music festival is far removed from its original elements and you will find proper restroom facilities, high-end dining options, first class drinks and performers from all over the world. The elements of peace, love and resistance remain an integral part of the experience, in exchange the cost of these events can be over $500 for a weekend of counterculture exploration.

Here are our top 4 music festivals based on experience, music variety, mission and value for the dance lover.

Now in its 15th year, Bonnaroo is a cathartic, collective experience via live performance. It is difficult to narrow down the reasons “Banooaroovians” have been coming to this event year after year. Located on a rural location lovingly called “The Farm”, it’s remote space allows for headliners that can play special, lengthier than normal late-night sets with an intimate feeling amongst the thousands of dance and music lovers that trek to this festival. The sense of community created by the magic at the campground which often lend its way to pop-up parties and shows by inspiring musicians is one of the favorite elements for every guest.

There’s the attraction of what the fest calls the Bonnaroovian Code, a list of suggested ethics that existed long before they were written down several years ago. Chief among them: Radiate Positivity. People walk through the iconic arch and shed their egos, often without even realizing. It creates the closest event to the spirit of Woodstock, with a contemporary utopian twist where the jocks and the hippies get along, where the young and old can play together without ever getting caught up in preconceived opinions.

Once a year, tens of thousands of people gather in Nevada’s Black Rock Desert (also known as “the playa”) to create Black Rock City, a temporary metropolis dedicated to community, art, self-expression, and self-reliance. They depart one week later, having left no trace whatsoever. The rumors are true that Burning Man is not for the faint of heart, with some research, preparation, and planning, an experience — and opportunity — beyond your wildest dreams awaits you. In Black Rock City, you’re guaranteed not to be the weirdest kid in the classroom.

The mission of inclusiveness offers everyone part of the growing community of Burners who are active year-round, around the world, ensuring that the fire of Burning Man culture never goes out. Life before and after Burning Man is explained with their welcome packet that includes a First-Timer’s Guide that outlines the 10 Principles of Burning man highlighting the ideals of radical inclusion, gifting, decommodification, radical self-reliance, radical self-expression, communal effort, civic responsibility, leaving no trace, immediacy, and full participation.

Considered by many as the Holy Grail of Stateside festivals, Coachella is a complex maze of events and it’s difficult to avoid knowing exactly what makes up the three-day, two-weekend extravaganza. All the hype about celebrities in the desert, frolicking alongside regular festival attendees, the guessing game around which surprise guests will come out for major acts (and always fruitlessly hoping for Daft Punk) and of course, the blazing hot sun and sand everywhere. I mean everywhere. Coachella developed based on a roster of diverse and widely clairvoyant talent across the board. From the underground-centric Yuma tent to the glitzy main stage, Coachella offers a different experience in its every crevice.

Coachella has been a longtime supporter of dance music even before the EDM boom (Paul Oakenfold and Fatboy Slim were top-billed headliners in 2001). The need for dance music to remain prominent amongst all the tents demonstrates the direction in which electronic acts are heading. Expanding beyond dark, pulsing club environments and LED screen bubbles, recent acts showcased a new extension of electronic music by incorporating newly incorporated elements.

Probably the lesser known of all the festivals listed, SASQUATCH! Is the ultimate music experience that invites classic artists like the Cure to mingle with pop genre populars Florence and the Machine. The thing about this growing festival is that it’s a controlled chaos. People delve more into the weird than the insanity of elements. You’re more likely to find someone dancing to Sia in a bacon costume than someone asking for their hair to be held back. Noted as the most beautiful music venue in the country, exposure to elements does present challenges. SASQUATCH! has remained a leader of diversity by including power-filled female front-bands as well as electronic mix dj’s featuring female mainstays, not a common trait of most popular music festivals.

Four days of a festival can be grueling. Living long on a campsite, with so many neighbors not showering, is a lot to ask of people. Yet the Sasquatch! Music Festival makes it an easy choice, boasting one of the season’s solidest lineups in a spectacular, peaceful setting perfect for a tranquil feast of musical exploration

Each festival offers an individual experience and a positive attitude with a lot of patience will ensure that you have a fabulous time. Drink water. Then drink some more water. Then drink even more water and you will stay energized and ready to dance the morning, day and night until your heart’s content.