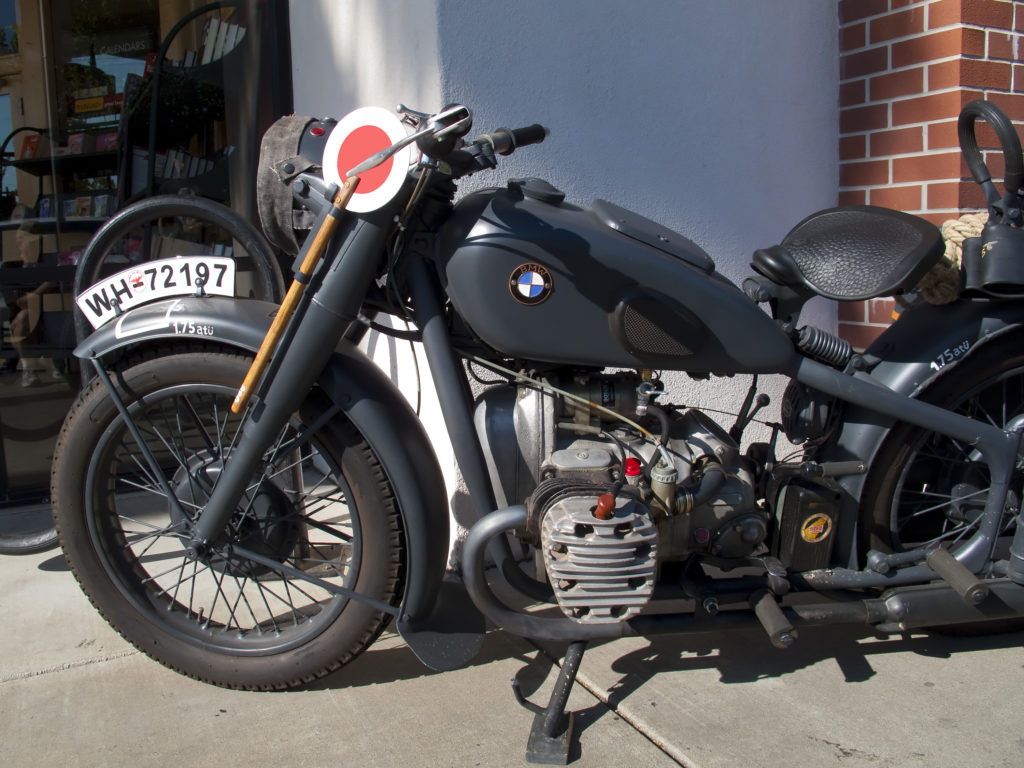 The first motorcycle was steam-driven (the “Roper Steam Velocipede“). Invented in 1867 by Francestown New Hampshire native, Sylvester Howard Roper, it was powered by coal. The gas-propelled version, usually credited as being the first, was not invented until 1885 by Gottlieb Daimler. In 1902 the Indian Motorcycle Company began mass-producing vehicles in Springfield MA. A year later, William Harley and Arthur and Walter Davidson founded the Harley-Davidson. The roots of this famous rodeway icon have not been forgotten and aesthetic references are common in all models produced today. Here is a list of some of our favorite vintage inspired motorcycles and what makes them vintage but with a contemporary system update.

Harley isn’t a firm known for revolutionising the appearance of its bikes, and as a result most of the machines in its range could qualify as ‘retro’ even though they’re usually classed as customs or cruisers. The bottom-of-the-range 883 Roadster is our choice, though, as it isn’t as cartoonishly in-your-face as many of the firm’s other bikes. The style isn’t pure cruiser, either – it’s more “standard bike” in terms of geometry and dimensions. Sure, there are alloys instead of wires, but even they are in the style of 1970s designs. The fact it’s the cheapest Harley is a bonus.

Kawasaki’s W800, and its W650 predecessor, haven’t sold in phenomenal numbers but on looks alone they’re hard to beat. The ‘Special Edition’ is particularly appealing. Everything has a convincingly 1960s shape, a convincing copy of the 1960s Kawasaki W1, itself derived from the BSA A7. So there’s even a little bit of ‘British’ DNA in there.

Guzzi’s V7 has got to be a contender for the “most overlooked bike of 2015” having been at the receiving end of significant upgrades for this year including a six-speed box, traction control, plus revised chassis geometry. The base Stone model comes in at just over $8,000, but we’d blow the extra $1,000 for the Special, with wire wheels and stripes. The 8635 Racer is nice, too, but a bit over the top on the appearance front with its chrome tank and red frame.

The original Vanvan dates all the way back to the early 1970s, and a reborn version has been sold overseas for several years. But this year we get a chance to swing a leg over this affordable little tyke. Don’t expect much power—there’s just a 199cc single cylinder thumping away and backed by a five-speed. But because it weighs just 282 pounds, it should be plenty nimble and quite a bit of fun to ride around town.

Triumph has long proven that expensive bikes and classic style don’t have to go hand-in-hand. Last year the company completely redesigned and modernized the Bonneville lineup with several engine sizes and power outputs. The new Street Cup, based on that Bonne, is like a smaller, cheaper, and friendlier Thruxton. The Cup uses the mildly-tuned 900cc version of the parallel twin engine but engineers included a throatier exhaust system. The Street Cup was designed to look like a faithful recreation of a classic café racer.

The vintage motorcycle has been the basis of many dreams and movie plots over the years with couples riding along snow covered mountain sides or drifting slowly into the California sunset. Visions of the loaner with his leather vest with his careless beard are always set atop of a classic motorcycle with shiny rims and a loud exhaust. However you fantasize or remember these classic motors, today’s options inspire nostalgia and we return back to a time when the earth seemed to move slower and the sounds of a motorcycle engine sang its sweet melody.

You might also enjoy more from our Sports category.